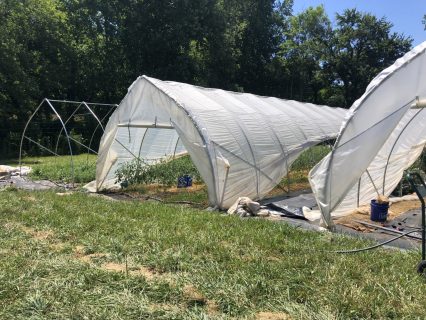 Thanks to their existing caterpillar tunnels, Erica and Karl were able to provide peppers, tomatoes and lettuce during shoulder seasons when other farms’ production had dropped off. During their first season of growing and selling at farmers markets, demand for Seven Oaks’ produce outpaced their supply at all of their outlets. 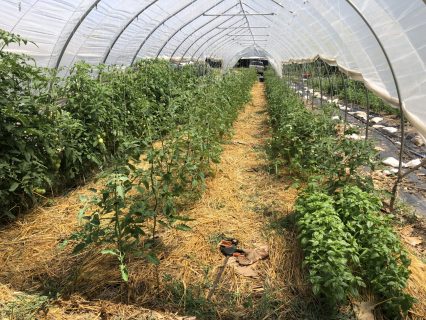 The tunnels will allow Erica and Karl increase their income by growing over the winter. They sell at the Rutherford County Market and the Bub City Farmers Market in Spartanburg where they have established themselves as the main, high quality organic vendor at the market.

Erica sends out a newsletter each week to let customers know what they will be bringing to the market. They also use Instagram. Their farm will be part of the NC Foothills Farm tour during the upcoming weekend and they will talk to visitors about the caterpillar tunnels and the support they have received though AgOptions.

The 2023 WNC AgOptions grant cycle is closed Please check back in March for the list of the 2023 grantees The 2024 cycle will launch in late summer 2023. Please email us HERE to be notified! END_OF_DOCUMENT_TOKEN_TO_BE_REPLACED

The 2022 WNC AgOptions grant cycle is closed.   Please check back in March for the list of the 2022 grantees!   The 2023 cycle will launch in the late summer. Please email us HERE to be notified! END_OF_DOCUMENT_TOKEN_TO_BE_REPLACED

Nicole and Aaron Bradley, Colfax Creek Farm Walk-in Freezer Expansion Grant Award: $6,000 With the help of a 2017 AgOptions grant, Colfax Creek Farm has been very successful in the past few years and has expanded to supply eight restaurants,... END_OF_DOCUMENT_TOKEN_TO_BE_REPLACED