Since the first craft brewery opened in Macon County in 2015, Todd has been taking advantage of the spent brewers grain to feed his cattle. He is now solely responsible for picking up the spent grain from two breweries in Franklin. However, the process of transporting and storing the grains was becoming time and labor intensive.

To maximize efficiencies in his small operation, Todd has constructed a better system to handle the 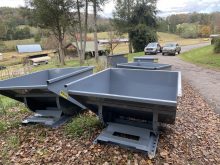 grains. Previously, plastic bins were filled at the breweries and forklifted onto his truck. Once at the farm, his tractor clumsily unloaded the bins where they were stored to cool, dripping and wet.

To improve the process, Todd has replaced the plastic bins with metal titling dumpster containers and purchased forklift tines to use on the tractor for proper mobility from the truck to the feeding troughs. A concrete pad was poured to create dedicated space for the containers to be stored.

This new facility has already reduced labor, making the process more economical. Todd estimates savings in the range of $13,000-$17,000 per year with these new improvements.

The 2023 WNC AgOptions grant cycle is closed Please check back in March for the list of the 2023 grantees The 2024 cycle will launch in late summer 2023. Please email us HERE to be notified! END_OF_DOCUMENT_TOKEN_TO_BE_REPLACED

The 2022 WNC AgOptions grant cycle is closed.   Please check back in March for the list of the 2022 grantees!   The 2023 cycle will launch in the late summer. Please email us HERE to be notified! END_OF_DOCUMENT_TOKEN_TO_BE_REPLACED

Robin Jackson, J4 Cattle Company J4 Beef and Provisions Grant Award: $8,000 J4 is a cow/calf producer that finishes their stock and directly markets their beef through wholesale, local CSA, farmers markets, and delivery. Having already installed a roadway and... END_OF_DOCUMENT_TOKEN_TO_BE_REPLACED