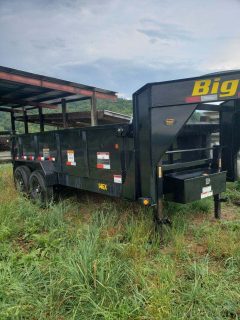 Starting in 2011, Scott began feeding his cattle spent brewers grain which led to finishing out cattle to supply meat to local restaurants in the Asheville area.

As demand for his beef has increased, so has his need to obtain more spent grains from local breweries. He currently gets grain from two local breweries, but uses trash cans to transport the grain to the farm 2-3 times a week.

His grant was used to purchase a dedicated dump trailer which has since saved significant time and money and has allowed him to transport more grain and expand his operation to increase sales.

Scott sells to multiple restaurants in Asheville, and having recently acquired a meat handling license, and started selling direct from farm to local customers in 2020.

The 2023 WNC AgOptions grant cycle is closed Please check back in March for the list of the 2023 grantees The 2024 cycle will launch in late summer 2023. Please email us HERE to be notified! END_OF_DOCUMENT_TOKEN_TO_BE_REPLACED

The 2022 WNC AgOptions grant cycle is closed.   Please check back in March for the list of the 2022 grantees!   The 2023 cycle will launch in the late summer. Please email us HERE to be notified! END_OF_DOCUMENT_TOKEN_TO_BE_REPLACED

Kathleen and Michael Balogh, Mountain Meadows Nursery Nursery Expansion Grant Award: $8,000 COVID positively impacted the nursery trade with people turning to their yards and gardens for exercise and enjoyment. Mountain Meadows’ sales have increased since June 2020 with many... END_OF_DOCUMENT_TOKEN_TO_BE_REPLACED

Julia Austin, McNeilly Enterprises Enhancing Capacity with Multi-purpose Facility Grant Award: $6,000 The owners of McNeilly Enterprises are constructing a 20-foot by 25-foot multipurpose building. They have purchased a commercial honey extractor and other equipment and supplies to facilitate processing... END_OF_DOCUMENT_TOKEN_TO_BE_REPLACED