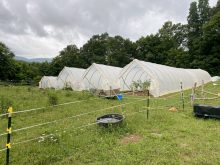 Mountainwise Farm has added multiple additional caterpillar tunnels to their primary garden plot for the use of season extension, pest/disease control and environmental control. 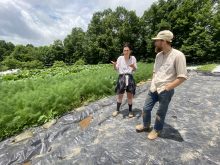 In the 2019 growing season, pests including aphids and deer caused severe damage to exposed crops. Crops grown undercover experienced none of these losses, indicating that more tunnels would be optimal way to increase production and maintain the health of the farm.

As sales tripled in 2019 without adding more growing 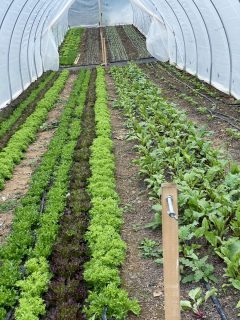 space, Casey has shown that proper crop planning and management can result maximum profits, even in small spaces.  Adding additional tunnels will not only minimize losses, it will allow for growing a longer season, doubling of production and adding an additional crop – tomatoes.

The 2022 WNC AgOptions grant cycle is closed.   Please check back in March for the list of the 2022 grantees!   The 2023 cycle will launch in the late summer. Please email us HERE to be notified! END_OF_DOCUMENT_TOKEN_TO_BE_REPLACED

Farm grantees show resilience in the face of COVID WNC AgOptions grantees receive $219,000 for farm projects ASHEVILLE, N.C.—Farmers in western North Carolina are receiving support to expand, diversify and modify operations in the midst of a pandemic. WNC Agricultural... END_OF_DOCUMENT_TOKEN_TO_BE_REPLACED