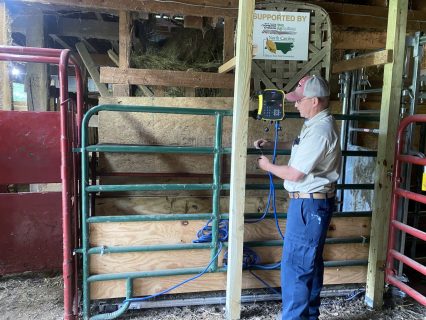 Since he stopped growing tobacco in 2004, Mr. Braswell has been working to increase his cattle business by steadily growing his herd of Black Angus. To increase efficiency and productivity of his existing handling facilities, a computerized weigh system was added.

The weigh system consists of a platform, weigh bars and a scale analyzer to assist in data 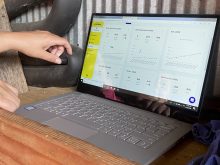 management of his current and future herds. A modern weigh system has already greatly contributed to the efficiency and productivity on the farm by decreasing the time, cost and effort of weighing cattle.

The system has also resulted in more accurate data collection, which is instrumental for making sound decisions that will effect overall performance and selling times for maximum profits.

The 2023 WNC AgOptions grant cycle is closed Please check back in March for the list of the 2023 grantees The 2024 cycle will launch in late summer 2023. Please email us HERE to be notified! END_OF_DOCUMENT_TOKEN_TO_BE_REPLACED

The 2022 WNC AgOptions grant cycle is closed.   Please check back in March for the list of the 2022 grantees!   The 2023 cycle will launch in the late summer. Please email us HERE to be notified! END_OF_DOCUMENT_TOKEN_TO_BE_REPLACED

Stacy Fields, Raspberry Fields Agritourism Improvements to the Farm Grant Award: $6,000 After building materials costs rose steeply in early 2021, Stacy determined she would not be able to complete her proposed project, which was installing a commercial kitchen in... END_OF_DOCUMENT_TOKEN_TO_BE_REPLACED

Anna and Wesley Sleight, Sleight Family Farm Packing Shed Grant Award: $6,000 As demand has steadily increased over the past 6 years (sales have grown 30% each year), Wesley and Anna have managed to get by with field packing produce... END_OF_DOCUMENT_TOKEN_TO_BE_REPLACED