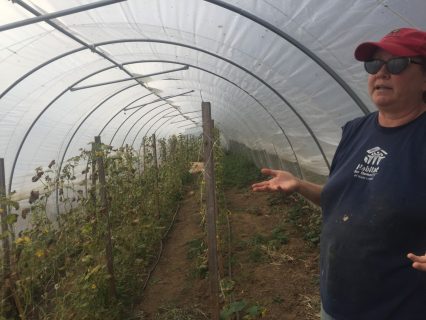 Trecuchet Hill has been producing small batch organic artisanal pickles since 2016. Because of their popularity and demand, plans are to scale up and double production in 2019.

Since cucumbers are the critical component of their value-added product, it has become imperative for them to find an effective method to battle pests and disease, especially from the cucumber beetle that transmit bacteria wilt to young cucumber plants.

In 2019, they employed the use of caterpillar tunnels sealed tightly during the entire growing season to prevent the entry of the prolific beetle, slowing the transmission and growth of fungal diseases.

By slowing the onset of fungal diseases, they saw increased yields up to 35% and were able to plant a

second crop of cucumbers during the same growing season, which increased their income significantly.

The 2022 WNC AgOptions grant cycle is closed.   Please check back in February for the list of the 2022 grantees!   The 2023 cycle will launch in the late summer. Please email us HERE to be notified! END_OF_DOCUMENT_TOKEN_TO_BE_REPLACED

The Year-End Dinner was held on November 8th, 2019 at the Addison Farms Vineyard, a 2019 WNC AgOptions grantee.. Over 50 people were in attendance, including representation from 18 of the 39 projects, members of Cooperative Extension, WNC Communities and... END_OF_DOCUMENT_TOKEN_TO_BE_REPLACED

The 2022 WNC AgOptions grant cycle is closed.   Please check back in February for the list of the 2022 grantees!   The 2023 cycle will launch in the late summer. Please email us HERE to be notified! END_OF_DOCUMENT_TOKEN_TO_BE_REPLACED

Farm grantees show resilience in the face of COVID WNC AgOptions grantees receive $219,000 for farm projects ASHEVILLE, N.C.—Farmers in western North Carolina are receiving support to expand, diversify and modify operations in the midst of a pandemic. WNC Agricultural... END_OF_DOCUMENT_TOKEN_TO_BE_REPLACED

2020 WNC AgOptions Informational Session via Zoom Tuesday, October 6, 2020 8 a.m. – 9:30 a.m. RSVP to agoptions@wnccommunities.org to get access information. You are invited to participate in an informational meeting about the WNC AgOptions grant program for growers... END_OF_DOCUMENT_TOKEN_TO_BE_REPLACED