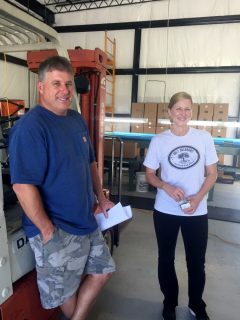 In response to the recent rapid growth of their business, 60-acre Holt Orchards has added a packing line to their apple operation.

A 2017 AgOptions grant was the catalyst that expanded their sales and resulted in growth that exceeded expectations. As a result, they have streamlined their packing process in order to meet existing demand and to position themselves for further growth in the future.

They used their grant funds to enclose an existing structure on their property to create an apple packing house. Automating their cleaning and packing process, which had been done by hand, is allowing them to meet current demand and increase their customer base.

Tracy and Todd, a brother/sister team, are keeping the family farm 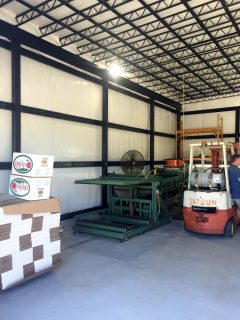 alive after their stepfather, Markie Holt, passed away from a heart attack in 2009, followed by their mother Virginia Holt in 2014 after she battled cancer for three years. “It has been a hard road for us, but we decided to stay in business, not only for mom and Markie, but for us to stay together as a family” Tracy said.

The 2022 WNC AgOptions grant cycle is closed.   Please check back in March for the list of the 2022 grantees!   The 2023 cycle will launch in the late summer. Please email us HERE to be notified! END_OF_DOCUMENT_TOKEN_TO_BE_REPLACED

Farm grantees show resilience in the face of COVID WNC AgOptions grantees receive $219,000 for farm projects ASHEVILLE, N.C.—Farmers in western North Carolina are receiving support to expand, diversify and modify operations in the midst of a pandemic. WNC Agricultural... END_OF_DOCUMENT_TOKEN_TO_BE_REPLACED

Julia Austin, McNeilly Enterprises Enhancing Capacity with Multi-purpose Facility Grant Award: $6,000 The owners of McNeilly Enterprises are constructing a 20-foot by 25-foot multipurpose building. They have purchased a commercial honey extractor and other equipment and supplies to facilitate processing... END_OF_DOCUMENT_TOKEN_TO_BE_REPLACED