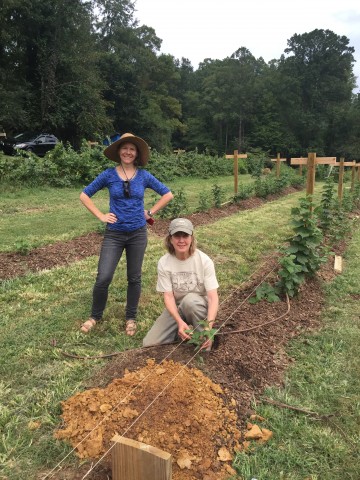 Janet upgraded the irrigation system on her blueberry farm to enhance the health of her berry bushes. She is also adding 200 raspberry plants to diversify her you-pick operation. The early summer fruiting floricane raspberries will bridge the gap between the Northern Highbush blueberries in June and the mid-July/August harvest of the Rabbit Eye blueberry variety.

Janet’s previous drip irrigation system was not producing enough pressure to consistently water all parts of the hilly patch. During the spring and early summer droughts of 2015 and 2016, she had to supplement with labor-intensive hand watering of younger bushes. Production lowered considerably, and income dropped by two-thirds.

Putting in this new “zone” of underground piping for new drip lines on the raspberry plantings is expected to solve the problem.

Cloud 9 Farm has produced blueberries since 1974 and blackberries since 2008. Janet has also added cattle, pastured poultry, honey bees and select harvest timber. She is part of the Bee Babe Made business, which makes natural balms, lotions, and beeswax skin care products. Vacation stays in two cabins and weddings on the farm have become popular, too. Since Janet retired from school teaching in 2007, she has turned her family’s hobby farm into a diversified operation demanding her full-time attention.

The 2022 WNC AgOptions grant cycle is closed.   Please check back in March for the list of the 2022 grantees!   The 2023 cycle will launch in the late summer. Please email us HERE to be notified! END_OF_DOCUMENT_TOKEN_TO_BE_REPLACED

Farm grantees show resilience in the face of COVID WNC AgOptions grantees receive $219,000 for farm projects ASHEVILLE, N.C.—Farmers in western North Carolina are receiving support to expand, diversify and modify operations in the midst of a pandemic. WNC Agricultural... END_OF_DOCUMENT_TOKEN_TO_BE_REPLACED

Clement Swift, Clem’s Organic Gardens Cold Storage for Crop Diversification and Expansion Grant Award: $8,000 Clem plans to scale up production at his farm this year with the addition of a leased parcel that will increase his growing area by... END_OF_DOCUMENT_TOKEN_TO_BE_REPLACED

Chue and Tou Lee, Lee’s One Fortune Farm Rice Harvester Grant Award: $6,000 One of the only rice producers in western North Carolina, Chue Lee has been providing rice to Hmong communities in western NC for a number of years.... END_OF_DOCUMENT_TOKEN_TO_BE_REPLACED