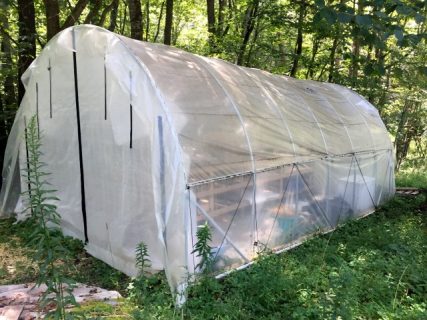 Matthew has constructed a hoop house for the propagation and fruiting of shiitake, oyster and lion’s mane mushrooms. The house allows for the ongoing propagation of mushrooms, while reducing input cost and increasing profits. He can produce his own mushroom substrate with mown grasses, winter squash vines and other forms of green refuse, all dried in the high tunnel, aggregated as straw and processed for use as a substrate along with spent brewers grain and purchased straw. 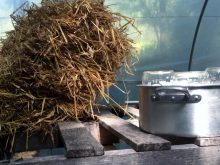 He only not only receives revenue from the sale of mushrooms, but also from compost made from the spent substrate, which he uses on the farm and occasionally sells elsewhere. He inoculates the substrate with red wriggler worms, which consume the mushroom mycelium and produce nutrient-rich compost for use on vegetable production fields. Matthew also sells any excess propagated mushrooms as “grow-at-home” bags.

“Mushroom production is a low-input, high-revenue enterprise, and the production of compost from the mushroom fruiting bags will reduce the need for purchased compost for produce operations on the farm,” Matthew said.

Matthew sells at the Watauga County Farmer’s Market and Banner Elk’s Farmer’s Market, as well as to Proper Restaurant, High Country Community Supported Agriculture members, Mountain Rooster and the New Public House. Matthew started farming in Boone in 2008 on ¾ acre of land, and now farms 1.5 acres in Valle Crucis, where he’s farmed since 2009. For the past three years, he has also managed the FIG (Farm Incubator and Grower) Farm, which connects new farmers and established farmers to share land resources.

The 2023 WNC AgOptions grant cycle is closed Please check back in March for the list of the 2023 grantees The 2024 cycle will launch in late summer 2023. Please email us HERE to be notified! END_OF_DOCUMENT_TOKEN_TO_BE_REPLACED

The 2022 WNC AgOptions grant cycle is closed.   Please check back in March for the list of the 2022 grantees!   The 2023 cycle will launch in the late summer. Please email us HERE to be notified! END_OF_DOCUMENT_TOKEN_TO_BE_REPLACED

Abbegail King, Ochre Hill Farms Expansion Project Grant Award: $6,000 Several years ago, Abbegail and her family bought land that has been farmed since the founding of Jackson County with the goal of returning it to being a full-time working... END_OF_DOCUMENT_TOKEN_TO_BE_REPLACED

John Dugan and David Anderson, Dugan Farms Food Safety Produce Packing Shed Grant Award: $6,000 Dugan Farms currently has no way to meet GAP and other food-safety requirements and there are no packing and washing sheds available to farmers on... END_OF_DOCUMENT_TOKEN_TO_BE_REPLACED