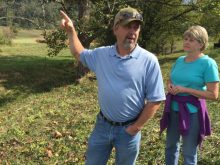 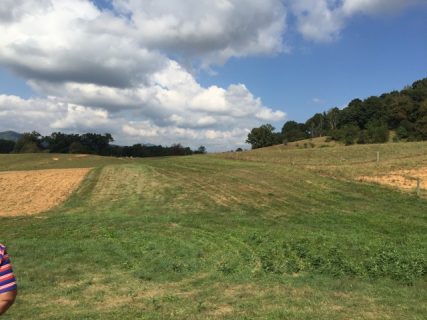 Tim and Jamie have enhanced their livestock operation by optimizing forage grasses and better managing rotations of cattle, sheep and goats. Improvements have resulted in a reduction of annual feed costs and an increase of stocking rates. By providing higher nutrient forage as opposed to lower nutrient winter hay, they expect to significantly improve breeding rates.

Their goal is to rotate livestock and stockpile forage so that livestock do not waste grasses during the peak grass growing season from April to mid-June. One method is to incorporate sheep, which are born in March and can be market ready in four months, in this grazing period. Additionally, they include goats in the rotation since they eat undesirable weeds. 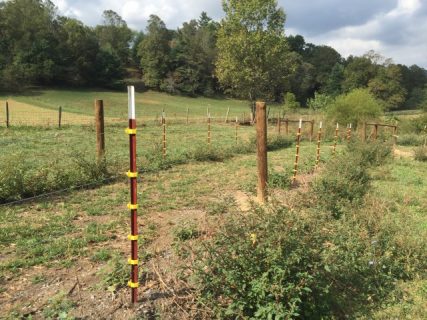 In implementing their plan, Tim and Jamie have installed additional electric fencing in their pasture as well as a section around a woodland area to prevent livestock from damaging young trees. They also hope this fencing creates better habitat for deer, turkey and bears, while protecting the livestock from predators.

They have also purchased a custom handling facility for sheep and goats to more safely treat them, preventing injury to both animals and handlers. The equipment is used when they are administering vaccines, treating foot problems, weighing, tagging, recordkeeping, worming, castrating and treating other health issues.

Tim and Jamie sell through the Mountain Cattle Alliance as well as directly to individuals. The former tobacco farm has been in their family’s hands since 1964, and they have farmed beef cattle since 1974. Their children, Jennifer, Stephanie and Joshua, have graduated college, married, and started professions, but are still involved with the farm.

“Many of our children’s values and work ethics came from farming, which they will carry with them wherever life takes them,” Tim said.

The 2023 WNC AgOptions grant cycle is closed Please check back in March for the list of the 2023 grantees The 2024 cycle will launch in late summer 2023. Please email us HERE to be notified! END_OF_DOCUMENT_TOKEN_TO_BE_REPLACED

The 2022 WNC AgOptions grant cycle is closed.   Please check back in March for the list of the 2022 grantees!   The 2023 cycle will launch in the late summer. Please email us HERE to be notified! END_OF_DOCUMENT_TOKEN_TO_BE_REPLACED

Marc Jackson, Jackson Farm Cattle Working and Feeding Facility Grant Award: $6,000 To facilitate the success of a rotational grazing system he is initiating in partnership with a Tennessee grower, Marc is building a working and loading facility where his... END_OF_DOCUMENT_TOKEN_TO_BE_REPLACED