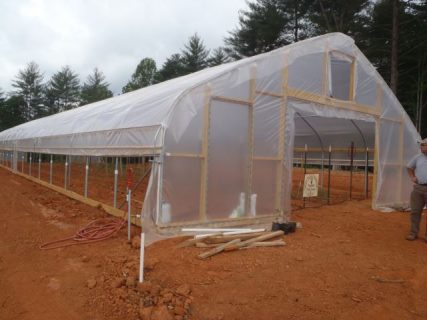 James is diversifying away from commercial poultry by expanding vegetable production on his farm with the addition of an unheated greenhouse, called a high tunnel. He also plans to grow his own transplants in a section of the tunnel, allowing him to move them to the field earlier than in the past and offer varieties that he cannot purchase from a typical nursery.

“At the end of the season, we can have the ability to get products longer to the markets, which also helps with customer retention,” James said. “Quality also can improve with the use of a high tunnel.”

In 2007, when his mom injured herself and could no longer help with the farm, James took over his family’s commercial poultry operation, which he grew up working on. As the contract poultry houses age, they need to be replaced, and James prefers not to go into hundreds of thousands of dollars of debt to do so.

He started farming five acres of vegetables for sale at local farmer’s markets in 2014. “I want to be more sustainable with our farm enterprise,” said James, who is farming land that has been in his family’s hands since 1825.

James only uses Organic Materials Review Institute (OMRI) approved sprays and amendments. With the help of his sister, he currently sells at farmer’s markets in Morganton, Sawmills and Lenoir. James anticipates expanding to the CSA model.

“The high tunnel is a great jump start to the farm,” James said.

The 2023 WNC AgOptions grant cycle is closed Please check back in March for the list of the 2023 grantees The 2024 cycle will launch in late summer 2023. Please email us HERE to be notified! END_OF_DOCUMENT_TOKEN_TO_BE_REPLACED

The 2022 WNC AgOptions grant cycle is closed.   Please check back in March for the list of the 2022 grantees!   The 2023 cycle will launch in the late summer. Please email us HERE to be notified! END_OF_DOCUMENT_TOKEN_TO_BE_REPLACED

Renea Winchester, Butterfly Cove Botanicals Medicinal Herb Expansion Grant Award: $6,000 In the wake of the COVID crisis, many people became first-time gardeners and the demand for seeds skyrocketed. There was also an increased demand for medicinal herbs, particularly elderberry... END_OF_DOCUMENT_TOKEN_TO_BE_REPLACED