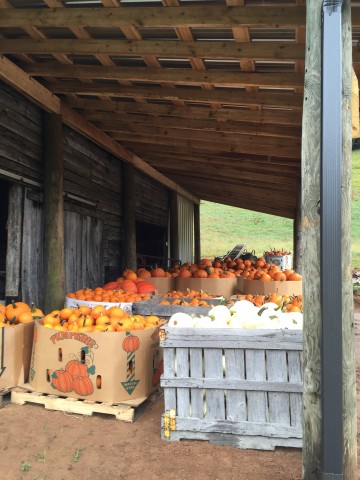 Anthony is building on the success of a 2010 WNC AgOptions project by improving the storage and curing of pumpkins and winter squash. He has constructed a passive solar heated facility to hold up to 36 bulk bins of squash per season. Anthony has increased the production of squash from one to six acres in the last four years.

In the past, Anthony has lost up to $7,000 worth of winter squash due to rainy periods. Only tarps covered his squash bins, and this environment was not conducive for curing. 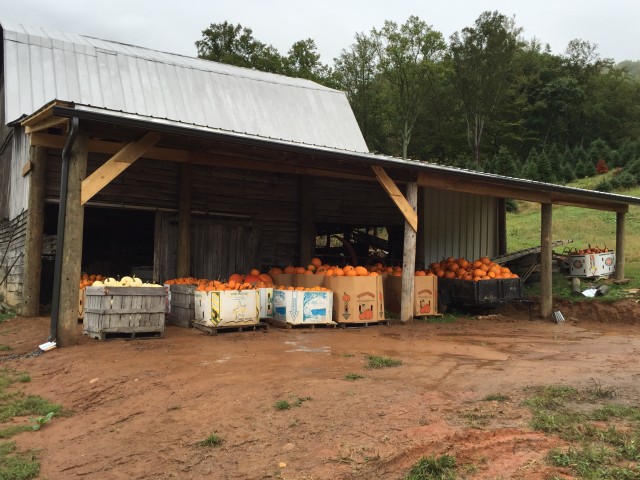 “Curing is not just drying but a post-harvest physiological process that involves changes of starches and sugars within the fruit,” Anthony said. Another goal is to retain the integrity of the squash stem.

The west-facing curing shed collects solar heat with a metal roof and side sheets. That heat is then circulated downward into the bin area with large fans. Thermal mass collectors stabilize the heat so that it is radiated into the building at night. 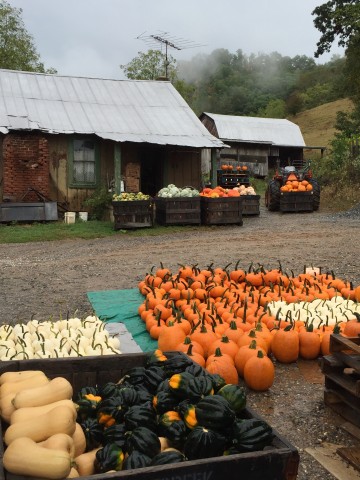 Anthony sells to the WNC Farmers Market, directly to individuals, and to restaurants. He developed a firm relationship with a restaurant following a 2011 WNC AgOptions project to expand his full color bell pepper production. “WNC AgOptions projects have evolved into adding a substantial portion of our farm’s annual income, which is money into the community.”

Anthony first started diversifying his farm, which has produced tobacco since 1976 and Fraser Firs since 1994, in the 1980s when he realized the value of diversification. He’s had various successful and not-so-successful ventures since then.

“My kids are now sixth generation on this farm and we are evolving and changing with the times and markets as every generation must do,” Cole said. “We produce much of our own food and follow practices of sustainability utilizing all tools in the toolbox that history and science combined can supply.”

The 2022 WNC AgOptions grant cycle is closed.   Please check back in March for the list of the 2022 grantees!   The 2023 cycle will launch in the late summer. Please email us HERE to be notified! END_OF_DOCUMENT_TOKEN_TO_BE_REPLACED

Farm grantees show resilience in the face of COVID WNC AgOptions grantees receive $219,000 for farm projects ASHEVILLE, N.C.—Farmers in western North Carolina are receiving support to expand, diversify and modify operations in the midst of a pandemic. WNC Agricultural... END_OF_DOCUMENT_TOKEN_TO_BE_REPLACED

Justin Stines, Stines Farms Improvements to Cattle Handling Facility Grant Award: $8,000 To increase the efficiency, safety, and profitability of the cattle operation, Stines Farms will construct a covered area that will house two new 16′ long adjustable alleys that will... END_OF_DOCUMENT_TOKEN_TO_BE_REPLACED