2015 Recipient: Down to Earth Farm 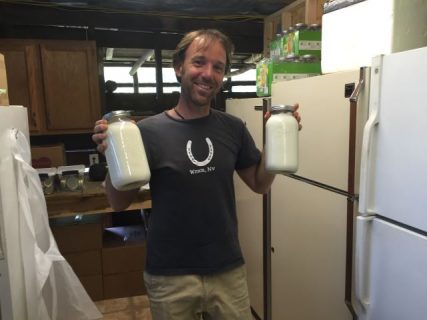 Andrea and Tim have diversified their two acre vegetable operation with a sheep dairy, building a small-scale dairy parlor.

They plan to grow the flock of 13 to 100 milking ewes during the next seven years, and have moved to machine (bucket) milking rather than hand-milking. They have also purchased a bulk tank chiller so that milk can be cooled rapidly to preserve health and flavor.

Unlike cow or goat’s milk, sheep’s milk can be frozen for up to a year without losing much of its cheese-making qualities. That means cheese and yogurt products can be made steadily months after the ewes stop milking. Andrea can extend her production season significantly beyond the standard 200-day lactation period for dairy sheep and therefore build a strong brand with year-round availability.

“We are looking for the sheep dairy to add additional income streams to the farm and to increase visibility of the farm,” Andrea said. “We also anticipate that it will make the farm economically and ecologically stronger by diversifying where our money comes from and by creating closed loop systems of fertility on the farm.” Andrea plans to move grazing rotations through fallow fields and cover-cropped vegetable fields in the fall.

Andrea is the former Organic Growers School Farmers Program Coordinator and helped grow the Collaborative Regional Alliance for Farmer Training (CRAFT) program. She interned on farms for two years before starting her own operation on leased land at a retreat center in 2011. “It is very powerful to retreat visitors to make the connection between the meals they eat and the vegetables I grow,” she said.

Andrea is primarily interested in marketing to local residents, responding to the strong interest in unique, locally grown nutritional foods. Sheep’s milk has a higher fat content than goat and cow, and is the most digestible because of small fat globules, more medium-chain fatty acids, and low lactose levels.

She notes the strong opportunity for a local sheep industry to fill a need nationwide. North America imports 360 million pounds of sheep’s milk each year, which takes 600,000 dairy sheep to produce. While sheep dairies are commonplace in Europe, they are just catching on in North America. In the United States and in Canada, there are only about 200 sheep dairies and 5,000 sheep.

“Western North Carolina is the perfect environment for sheep,” Andrea said. “The summers are cool, much of the land is steep and mountainous, and sheep can graze easily on such slopes. In addition, there has been a long tradition of dairying here. On our road alone, there are several abandoned dairies. There is a clear argument that this is a farm enterprise that many more people should consider.”

The 2023 WNC AgOptions grant cycle is closed Please check back in March for the list of the 2023 grantees The 2024 cycle will launch in late summer 2023. Please email us HERE to be notified! END_OF_DOCUMENT_TOKEN_TO_BE_REPLACED

The 2022 WNC AgOptions grant cycle is closed.   Please check back in March for the list of the 2022 grantees!   The 2023 cycle will launch in the late summer. Please email us HERE to be notified! END_OF_DOCUMENT_TOKEN_TO_BE_REPLACED

John Dugan and David Anderson, Dugan Farms Food Safety Produce Packing Shed Grant Award: $6,000 Dugan Farms currently has no way to meet GAP and other food-safety requirements and there are no packing and washing sheds available to farmers on... END_OF_DOCUMENT_TOKEN_TO_BE_REPLACED