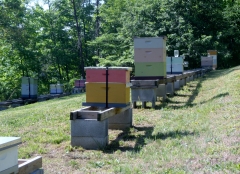 Ryan is expanding the production of nucleus colonies, or “nucs,” to supply his own replacement colonies, cut down on swarming, as well as sell surplus nucs to other beekeepers to create a supplemental revenue stream. With this project, he plans to produce an additional 150 nucs. 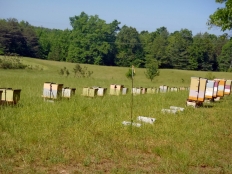 Ryan, who is the fourth generation of his family to keep bees, established Blue Ridge Apiaries in 2010. The apiary currently has over 200 colonies and an annual production of more than 10,000 pounds of honey. Ryan stocks two dozen farms in three counties with approximately 12 million honeybees.

A colony’s instinct to swarm can be mitigated if the beekeeper reduces congestion inside the colony. Since a lot of time is currently spent countering this instinct, labor for this project is a substitution rather than an addition.

This project also aims at reducing mite pressure in Ryan’s hives and consequently mitigation treatments and labor inputs. Ryan uses Varroa Sensitive Hygiene stock, which tolerate varroa mites, the most significant parasite facing domestic beekeepers. “The potential significance of this cannot be overstated given the problems that varroa mites have caused in our industry for more than three decades,” Ryan said.

The 2023 WNC AgOptions grant cycle is closed Please check back in March for the list of the 2023 grantees The 2024 cycle will launch in late summer 2023. Please email us HERE to be notified! END_OF_DOCUMENT_TOKEN_TO_BE_REPLACED

The 2022 WNC AgOptions grant cycle is closed.   Please check back in March for the list of the 2022 grantees!   The 2023 cycle will launch in the late summer. Please email us HERE to be notified! END_OF_DOCUMENT_TOKEN_TO_BE_REPLACED

Tyler Hunsader, Jeter Mountain Farm Canner for Hard/Carbonated Cider Grant Award: $8,000 After opening to the public in 2020, Jeter Mountain Farm saw unexpectedly high sales of their hard cider, which was produced using their apples. In 2022, in order... END_OF_DOCUMENT_TOKEN_TO_BE_REPLACED

Christa Kelley, Land of Milk and Honey Apiary Expansion and Increased Efficiency Grant Award: $6,000 Christa will be expanding the farm’s hives by 50%, adding eight colonies to their current apiary of 16 hives. With the expansion, honey production is... END_OF_DOCUMENT_TOKEN_TO_BE_REPLACED