Small investments in farmer innovation can bring hefty economic rewards, according to a new study by researchers at the Center for Business and Economic Research at UNC-Greensboro.

The program, which provides small grants to farmers and farmer groups piloting innovative enterprises on North Carolina farms, has invested $900,000 in 17 counties of Western North Carolina between 2009 and 2011. It works in partnership with WNC Agricultural Options, a program of N.C. Cooperative Extension, to administer grants in these counties. 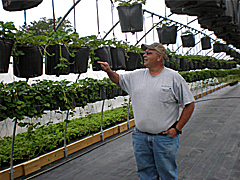 In the last three years, the program has invested $3.6 million in 367 projects across the state, with a result of more than $33 million in economic benefits to the state and more than 4,100 new jobs, according to a recent study by Dr. Andrew Brod at the UNC-Greensboro Center for Business and Economic Research.

The study looks at the money and jobs created directly on-farm and the multiplier effect in the state economy. The program created $205 new dollars circulating in the economy for every dollar spent, the study concluded.

The program is funded by the North Carolina Tobacco Trust Fund Commission. The 2011 budget proposed by the Appropriation Committee in the state’s House of Representatives would abolish the Commission and re-direct its funding.

The program’s cost-share grants, which average about $10,000, allow farmers to diversify their operations and develop new products and markets, according to Linda Shaw, executive director at RAFI.

“Investment in farm enterprises is an effective driver of economic growth in struggling rural communities,” Shaw said. “More than 80 percent of participating are still going strong after their third year. They create jobs, preserve farmland, enable farmers to innovate and share their ideas, and provide nutritious food.”

“I am a big proponent of the Tobacco Trust Fund Commission,” says Steve Tate of Goat Lady Dairy in Climax, N.C.

“People are so frustrated and want say that the system is screwed up and that government does not work,” Tate said. “Yes, a lot is wrong, but the tobacco settlement and the way it’s negotiated so there is money for farmers in rural communities, in my mind that is a huge success.”

Shaw says farmers and rural advocates will fight the cuts. “Rural communities have been hit hard in the economic downturn. This study demonstrates that these small investments in farm businesses are one of the best ways to create jobs and bring dependable income to the areas that need it most.”

RAFI is a nonprofit organization that cultivates markets, policies and communities that support thriving, socially just and environmentally sound family farms. RAFI is based in Pittsboro, NC. Find us online at www.rafiusa.org or call (919) 542-1396.

The 2023 WNC AgOptions grant cycle is closed Please check back in March for the list of the 2023 grantees The 2024 cycle will launch in late summer 2023. Please email us HERE to be notified! END_OF_DOCUMENT_TOKEN_TO_BE_REPLACED

The 2022 WNC AgOptions grant cycle is closed.   Please check back in March for the list of the 2022 grantees!   The 2023 cycle will launch in the late summer. Please email us HERE to be notified! END_OF_DOCUMENT_TOKEN_TO_BE_REPLACED

Dave Walker, Daffodil Spring Farm Scaling Up Vegetable Production Grant Award: $3,000 With the main goal of achieving greater farm revenue through diversification and resiliency, Dave will create a wash and pack line to be housed under a covered shed.... END_OF_DOCUMENT_TOKEN_TO_BE_REPLACED

Adam Pressley, Pressley Farms Strawberry Production Expansion Grant Award: $6,000 The Pressley family started growing strawberries in 2015 with 500 plugs, ramping up their crop to about 3,500 plants on 0.17 acres by 2019. For the 2021-2022 season, they have... END_OF_DOCUMENT_TOKEN_TO_BE_REPLACED

Roy Joseph Bledsoe, Longview Farm Improvements to Cattle Business Grant Award: $6,000 A former tobacco farmer who stopped growing tobacco in 2004, Mr. Bledsoe has been concentrating on selling cattle and is looking to improve practices on the farm. With... END_OF_DOCUMENT_TOKEN_TO_BE_REPLACED