“It is going to give us a lot more opportunity — being able to weigh and measure, figure out who’s producing the most, and share that weighing system with other farmers in WNC.” ~ Tim Kelley 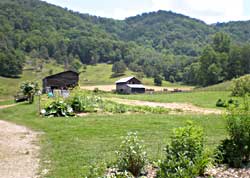 Tim Kelley’s project improves safety and saves him time, so that eventually he has the capability to expand his herd. Tim has raised cattle since 1974 and grew tobacco until 2003 along with variety of other field crops. He is experimenting with ways to produce alternative income such as goats and sweet sorghum.

In the near future, he hopes to farm full-time with his wife and son, and is improving his cattle operation to do so. He has developed a spreadsheet to track cowherd performance, a report that can be helpful to other farmers.

With his WNC AgOptions award, he will purchase scales to weigh cattle, a squeeze chute to control cattle safely, fencing lots to hold cattle, and a shelter to work cattle and protect the equipment.

This reporting method and equipment will allow him to encourage a productive herd and ultimately sell heavier cows. This project fits well with the WNC Pre-conditioning Program in which he markets his meat and offers him the most return on investment.

The 2022 WNC AgOptions grant cycle is closed.   Please check back in March for the list of the 2022 grantees!   The 2023 cycle will launch in the late summer. Please email us HERE to be notified! END_OF_DOCUMENT_TOKEN_TO_BE_REPLACED

Farm grantees show resilience in the face of COVID WNC AgOptions grantees receive $219,000 for farm projects ASHEVILLE, N.C.—Farmers in western North Carolina are receiving support to expand, diversify and modify operations in the midst of a pandemic. WNC Agricultural... END_OF_DOCUMENT_TOKEN_TO_BE_REPLACED